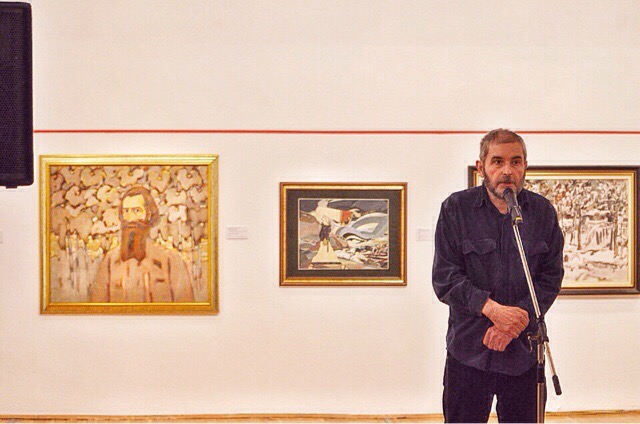 Krasimir Iliev graduated from the Bulgarian National Academy of Art, Department History of Art in 1982. After his graduation, he earned his living by activities which were not related to art studies. He worked as a dyer, tiler, restorer of furniture and in other manual professions. He organized several independent exhibitions, for example at the National Palace of Culture in Sofia, 1989; "K–14" in Oberhausen in 1990; at the Bochumer Kulturrat in 1991; in the Fridtjof Nansen-Haus in Ingelheim in 1992. In 1994 he started working with the Open Society Foundation. In 2005 he was invited by Liliya Borova to collaborate with the Krag+ Gallery. Since 2007 he has worked as a keeper and curator at the Sofia City Art Gallery (SCAG). Iliev is initiator and curator of numerous exhibitions related to the forms of opposition in the field of fine arts, such as retrospectives about Ivan Georgiev-Rembrandt, Angel Stanev, Evgeniya Vodenicharova, and Ziyatin Nuriev. H was initiator and curator of the thematic exhibition "Forms of Resistance", for which he also wrote the catalogue of the same title.

The exhibitions he conceptualized are research projects by means of which the author poses questions and gives publicity to concealed crimes against Bulgarian artists and demonstrates the regime's mechanisms to ideologically control art. Iliev shows the active role of some painters, their resistance against the system, and the dogmas of Socialist Realism.

Krasimir Iliev recounts: "The main question in this attempt for research is whether there was a resistance by the painters against the roller of the ideological machine, which in the 1970s and the early 1980s gradually transformed into a stand with carrots (if I may use the stick and the carrot metaphor). The roller as well as the hand-cart had one and the same aim – to deform. I don't know which one was worse. The attitude of the authorities in the country caused by their limited intellectual capacity and the ambition to follow like idiots every Soviet example, especially in the first decade, led to tragic results in fine arts. (...) Those in powerful positions erased the traces of their participation in the repressions against their colleagues. Documents that were supposed to be kept in the archive were found thrown in front Iliya Petrov's house. The remains of the files of the State Security have a crucial importance for lifting the veil and this is relevant for all times, for the whole forty-year period of the research. It is impossible to reach the facts let alone understand what was happening if we don't read the files. (...) The fear still exists. We, the people who lived during those years, built a barrier between our thinking and the public speaking."