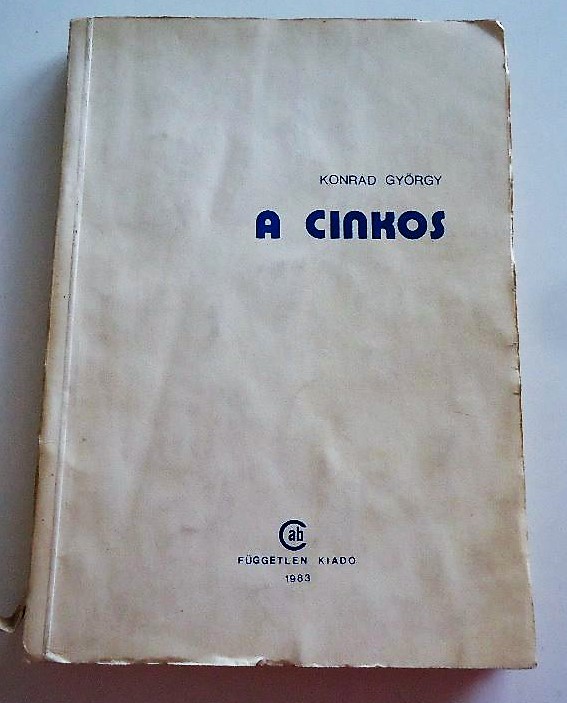 György Konrád's novel, A cinkos (literally 'The Accomplice' but translated as The Loser), was finished in 1978, but was not allowed to be published officially in Hungary until the change of regimes in 1989. Konrád started to work on The Loser in Budapest and in the picturesque village of Csobánka, just a few kilometres from the capital. He was kept under constant surveillance by the political police, and both his flat in Budapest and his rented house in Csobánka (a former Chiming House, once a residence of Catholic nuns who moved into a new building) was bugged. This village house was the scene where Konrád and his friend, the sociologist Iván Szelényi, wrote their book entitled Intellectuals on the Road to Class Power, which was considered a primary threat by the party, which sough to prevent its publication and circulation by all means. In October 1974, the secret police searched the Csobánka house for typescripts and related notes. They did not find the first chapters of The Loser hidden in an old desk, so Konrád was able to continue working on the manuscript.

The fact that the manuscript of The Loser remained safe from the authorities proved to be decisive for Konrád's career. During the process of their persecution, Konrád, like Szelényi, was offered the chance to leave the country for good as result of an international protest campaign against their arrest. Szelényi took the opportunity and emigrated to England, but Konrád decided to stay, for he wanted to finish The Loser. As he retrospectively commented on his decision, he had realized that in exile he would have to focus on his academic career and struggle with all the difficulties of establishing a new life. Such time consuming efforts would certainly threaten his ambition to finish his next literary work. Therefore, via interlocutors, he made a deal with György Aczél, the principal architect of cultural policy at the time, that he would stay in Hungary if the political police would terminate its continuous harassment and allow his previous novel, finished in 1973, A városalapító (that is The City Builder), to be published. Aczél agreed, and after significant cuts the novel was published in 1977. Beginning in 1974, Konrád received advancements from Magvető Publishing House for A városalapító, which together with payments from abroad for his translated books secured him a modest income. Konrád also worked as a ghost writer, another way to make a living. Thus, having his and his family's basic needs fulfilled, unlike so many prominent dissident writers from East Central Europe, he did not choose to emigrate.

Konrád did not become isolated from the West, however. In 1976, his three-year prohibition for applying for a passport ended, and in 1977 Konrád was granted permission to leave for West Berlin to become a writer-in-residence in the Berlin Artist Program (Berliner Künstlerprogramm) of the German Academic Exchange Service (Deutscher Akademischer Austausch Dienst, DAAD). In 1978, he spent some time in the United States with a stipend offered by his American publisher, Harcourt Brace Jovanovich (HBJ). Konrád has been working on The Loser over the years, and he finished the novel in New York in autumn 1978.

He knew that the work had no chance of being published in Hungary. The novel covers five decades of Hungarian history via the narrator's visions, who is a writer incarcerated in a mental asylum along with a number of other political dissidents. It contains critical assessments of the role of the Soviet Union and a sympathetic depiction of the 1956 revolution. Upon return to Hungary, Konrád delivered a typescript to samizdat publisher Gábor Demszky, but in 1979 the secret police confiscated the copy. The Loser was first published in German with the title Der Komplize (Suhrkamp, 1980) and in French as Le Complice (De Seuil, 1980), and even the English translation (HBJ, 1982) preceded the first Hungarian samizdat edition by Demszky's ABC Független (1983). The samizdat version was reprinted by the New York Hungarian publisher Sándor Püski in 1986.