Special issue of the Hungarian samizdat paper ’Hírmondó’ on the debates of Cultural Forum and Counter-Forum held in Budapest, October–November 1985 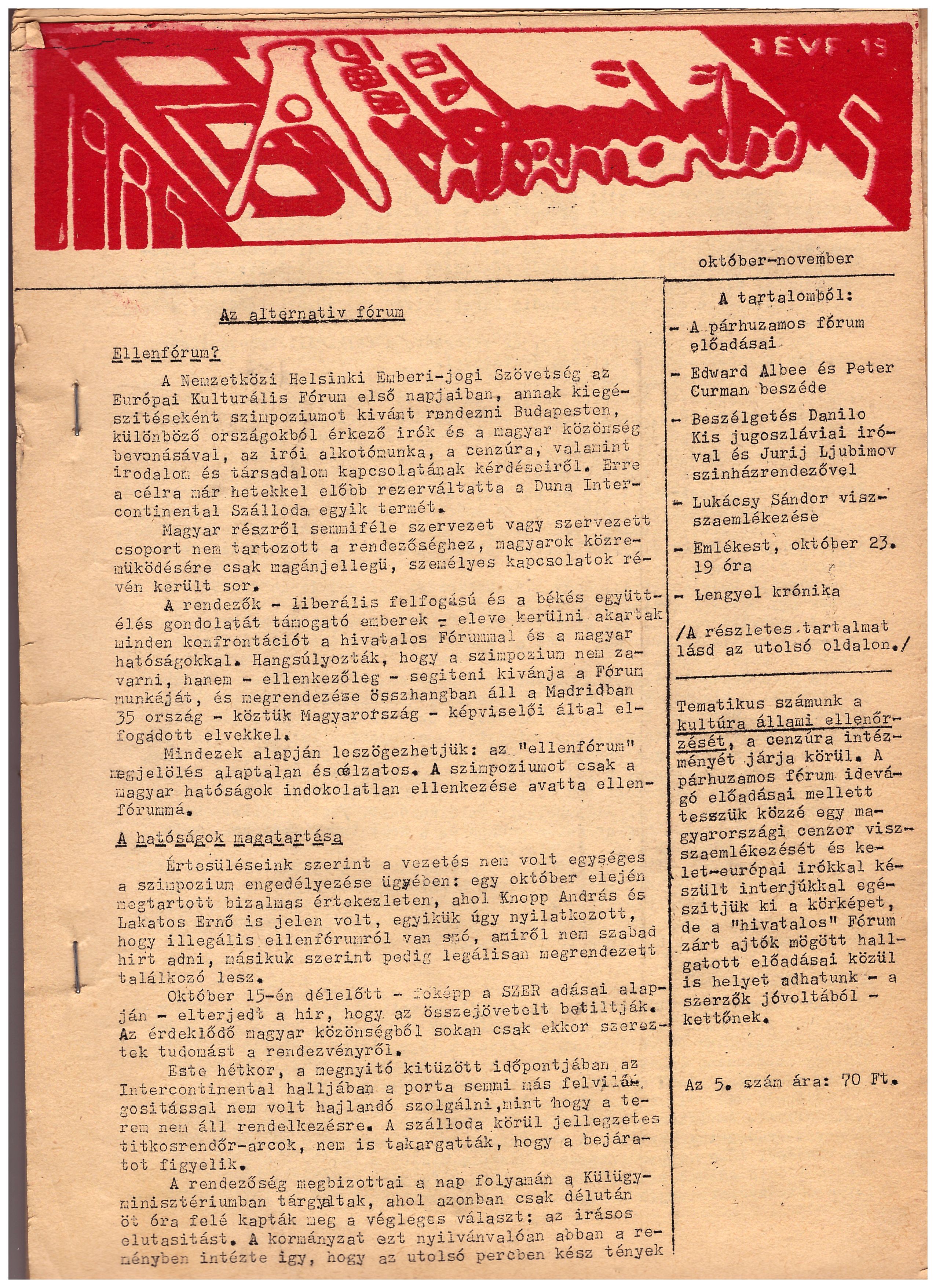 Special issue of the Hungarian samizdat paper Hírmondó on the debates at the Counter-Forum in Budapest, October–November 1985

The Hungarian samizdat periodical Hírmondó (“Messenger”) was launched in 1993 by Gábor Demszky, also the founder of AB Independent Publishing House and from 1990 to 2010 the Mayor of Budapest, and hardly more than a year later also the founder of Beszélő (“Speaker” or “Prison visitor”). Soon, other samizdat papers were also launched, such as Demokrata (“Democrat”) which was founded by Jenő Nagy, and Máshonnan Beszélő (“Speaker from Elsewhere”), an East European Monitor which reflected the increasing interest among the public in the uncensored press and the Hungarian samizdat press. Hírmondó was published as a screen-printed bimonthly; by the Autumn of 1985, it had been published in 15 issues, each of which sold well. Its profile, style and character were somewhat different compared to other free press products, such as Hírmondó, which preferred to publish shorter articles and interviews. Its greatest asset was rather the fresh news blocs based on many sources.

Well over of one third of its October–November 1985 issue was dedicated to the debates which had just taken place at the Budapest Cultural Forum and the Counter-Forum. This issue included 10 documents, interviews, essays, and articles, for instance conference papers by Danilo Kis, Amos Oz, Edward Albee, and Peter Curman, open letters by Géza Szőcs and Miklós Duray, interviews with Jurij Ljubimov and Danilo Kis, US Congressman D’Amato’s speech, etc. Hungarian readers were also given a detailed introduction to the principles and activities of International Helsinki Federation for Human Rights, which had been founded three years earlier. Though the articles and comments were published with no names, the issue nonetheless seems to be the product of good teamwork among the authors, editors, translators, and interviewers. Two of the authors who published anonymously in the issue were editors Miklós Haraszti and Gábor Demszky. Their witty styles and challenging statements make their writings easy to identify.

This special issue of Hírmondó, a Hungarian samizdat periodical, was dedicated to the debates which took place at the Counter-Forum. These debates were fresh and provocative, and they evinced a clear commitment to engagement in human rights. Thus, the issue stands out from among the tired, routine news and reports which appeared in the professional press, both in the East and in the West.