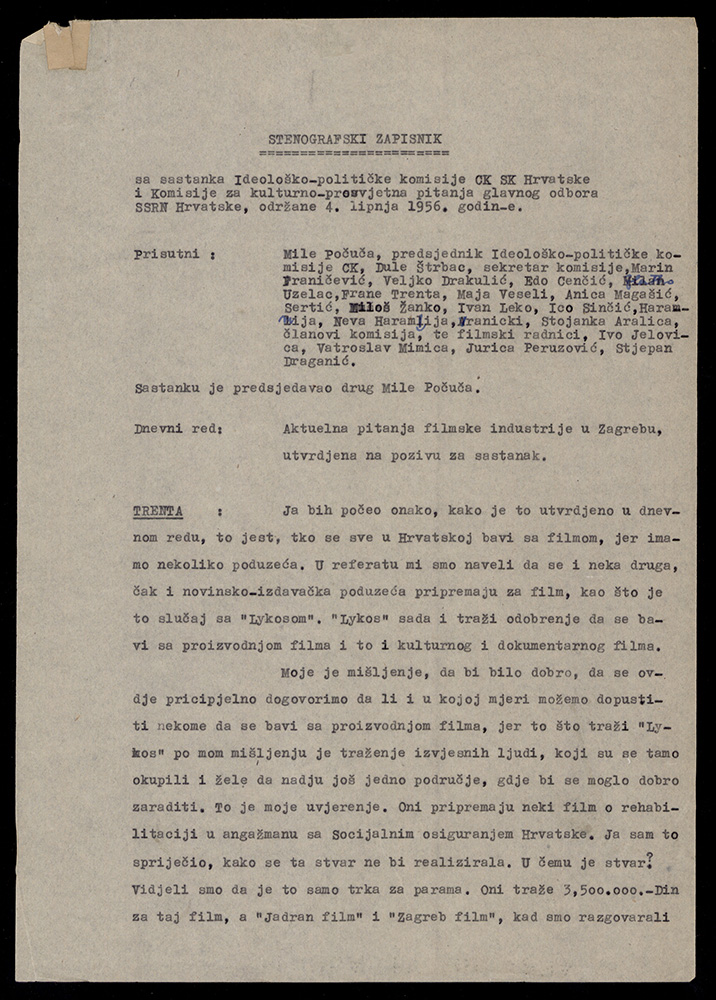 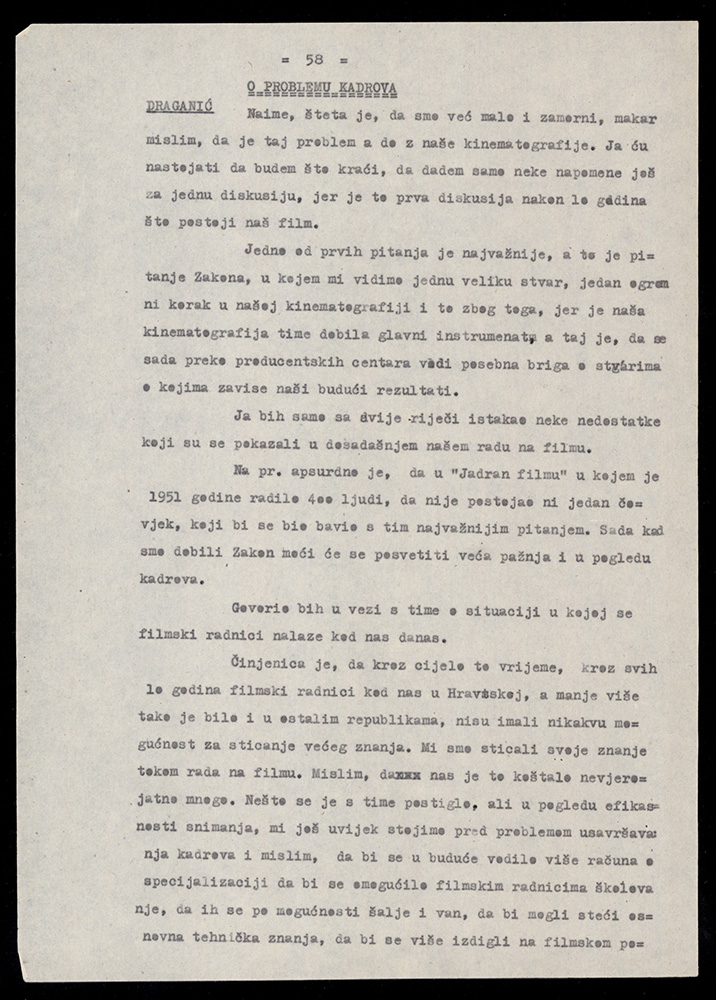 These are elaborate minutes of the session in which the current issues in the film industry in Zagreb were on the agenda. At the session, Ivo Jelovica, Vatroslav Mimica, Jurica Peruzović and Stjepan Draganić also participated along with the members of the Ideological Commission of the CC LCC and the Commission for Cultural and Educational Issues of the Central Committee of the Socialist Alliance of the Working People of Croatia (SAWPC). The document is important because it shows how the members of the Commission steered the film industry in Croatia, the production of films, and how they managed recruitment and staff within that industry. The participants in the meeting analysed the situation in Croatia: who is engaged in the film business, the need for two art centers/production companies; Jadran film and Zagreb, and the related issue of finances, staff and quality of achievement. The role of the Film Council was also emphasized as the authoritative body for quality, but also the ideological "regularity" of productions, whose role was to approve screenplays. In addition to this, the question was raised as to whether such "socialistic morality" could be ensured in the film company. Particularly interesting was the part of the discussion on the staff in film companies, when Dule Štrbac, a member of the Commission, noted that the problem surrounding Jadran film was the accumulation of personnel who were politically and morally problematic, but who were professionals of the highest quality. He appointed Branko Marjanovic as such, saying that he was considered an irreplaceable film director and expert, but also mentioned his film The Watch on Drina (Straža na Drini) from the time of the Independent State of Croatia (NDH), and emphasized how he "brings together people who fit his understanding and concepts." Branko Belan was appointed as a troublemaker, as he was the screenwriter of the film Odnarođeni, whose screenplay was awarded the highest Ustasha prize at the beginning of January 1945. The third person featured in a negative context was Krešo Golik, who "declares himself as an Ustasha dorojnik" and wrote that the Ustasha "will never surrender alive." The members of the Commission wondered how such people had the ability to work, and on the other hand "our staff" has failed to hold on. An example in Zagreb Film was Zvane Črnja, a playwright, as an imposing cadre, although it was said that he should not be engaged in certain duties.

Frane Trenta emphasized that "strong political and party personnel should be placed in these companies," and Milos Zanko supported him by saying that the Council should not appoint people who are not "on course" and that the Film Council should also provide the appropriate staff.

It is interesting to note that the record also mentions the work of the party organization in the company and that in past years opposing to them meant to be left out of work and to starve, to be without social security, to remain without any protection, to be silent or to obey ... This especially very clearly shows the role of LC organization in directing the work of film companies, censorship and monitoring the "ideological correctness" of the personnel and policies of the companies themselves.

Mile Počuča finally concluded that sit the enemies of socialism or at least the problematic people were sitting in both companies, and advocated a special meeting to see who should be thrown out and who should stay. It was concluded that the meeting should be held.