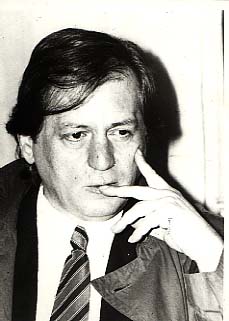 Bogdan Tirnanić was a prominent Serbian journalist, essayist, publicist, film critic, and actor. He was born in Belgrade on 14  September 1941.

Tirnanić attended the Tenth Belgrade High School, but did not graduate. He began his career as an editor in the Belgrade youth journal Susret.Tirnanić wrote for the weekly NIN, where healso worked as editor and later editor-in-chief, for two decades. He wrote for manyBelgrade-based publications, as well as for a number of television stations.

Bogdan Tirnanić co-authored the script for the film Poslednji krug u Monci [The Last Circle in Monza]. He starred in Rani radovi [Early Works] by Želimir Žilnik, Crnom bombaderu [The Black Bomber], Dečko koji obečava [The Promising Boy] and in Otpisani [The Written-Offs].

Tirnanić most important legacy was as a film critic, expert, and contemporary of Yugoslav Black Wave. His essays on the topic were published under the name Crni talas [Black Wave] in 2008.