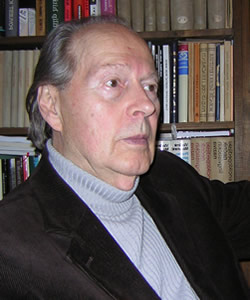 Radojević’s field of interest is very broad. He has written poems, prose, and literary criticism. He has made special contributions to the Montenegristics, a recently founded scientific discipline examining Montenegro and its inhabitants from different linguistic, archaeological, historical, ethnological, economic, political, and cultural perspectives. He has been published in numerous newspapers and journals throughout the former Yugoslavia in addition to his eighteen books.

During the communist period, Danilo Radojević was designed by the authorities as a Montenegrin nationalist and separatist because he published works discussing the particularities of Montenegrin culture, language, and identity. In 1972, he was officially banned from publishing in Montenegro, though he had found it practically impossible to publish even before the ban. Instead, he presented his views in some Croatian journals, which were also then soon to be declared nationalist.

Danilo Radojević was also listed in the White Book of the Central Committee of the League of Communists of Montenegro. The White Book [Bijela knjiga] is a 24-page document, published from 1972, in which the League of Communists of Montenegro attempted to harmonize its activities with the League of Communists of Yugoslavia, following the 1972 arrest of Croatian writers and scientists accused of being members of the Croatian Spring. Danilo Radojević’s name was listed among the first group of nine authors who were strictly prohibited from speaking in public. Others include Danilo’s brother Radoje Radojević, considered to be one of the founders of the science of Montenegrin language and literature, and Vojislav Nikčević, best known for his work on promoting Montenegrin as a distinct language from Serbian.