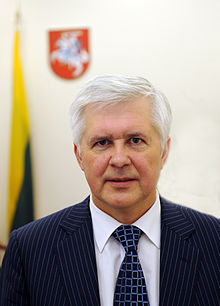 Vytautas Umbrasas is a Lithuanian historian, diplomat and politician. As a pupil at a secondary school in Molėtai, he joined informal organisations and participated in various Lithuanian ethnic festivals that were not officially forbidden, and yet also not recognised and supported by the state. Family members who were persecuted and oppressed by the Soviet regime, including his uncle, the Catholic priest Jonas Žvinys (1901-1994), had a major impact on his education and the formation of his attitudes and his belief system. Because of his activities and views, Umbrasas was not allowed to enter Vilnius University to study history. He only became a history student a few years later, in 1979. During his studies at the university, he was chair of the Student Scientific Society. In 1983, he moved to Rumšiškės Ethnography Museum for family reasons, where he worked as researcher, and later as deputy director. During the Sąjūdis (Lithuanian National Movement) period, Umbrasas participated actively in the political and social life of the Republic of Lithuania. In 1997-2004, he was an adviser to the defence minister, he later took on diplomatic work, and since 2008 he has been vice-minister of defence.
Umbrasas says that the cultural opposition was a cohort or generation of people who did not fit into the system at that time, and sought to live their lives their own way. The aim of the cultural opposition was not to fight against the Soviet system, but to seek high standards and the fulfilment of personal talent.