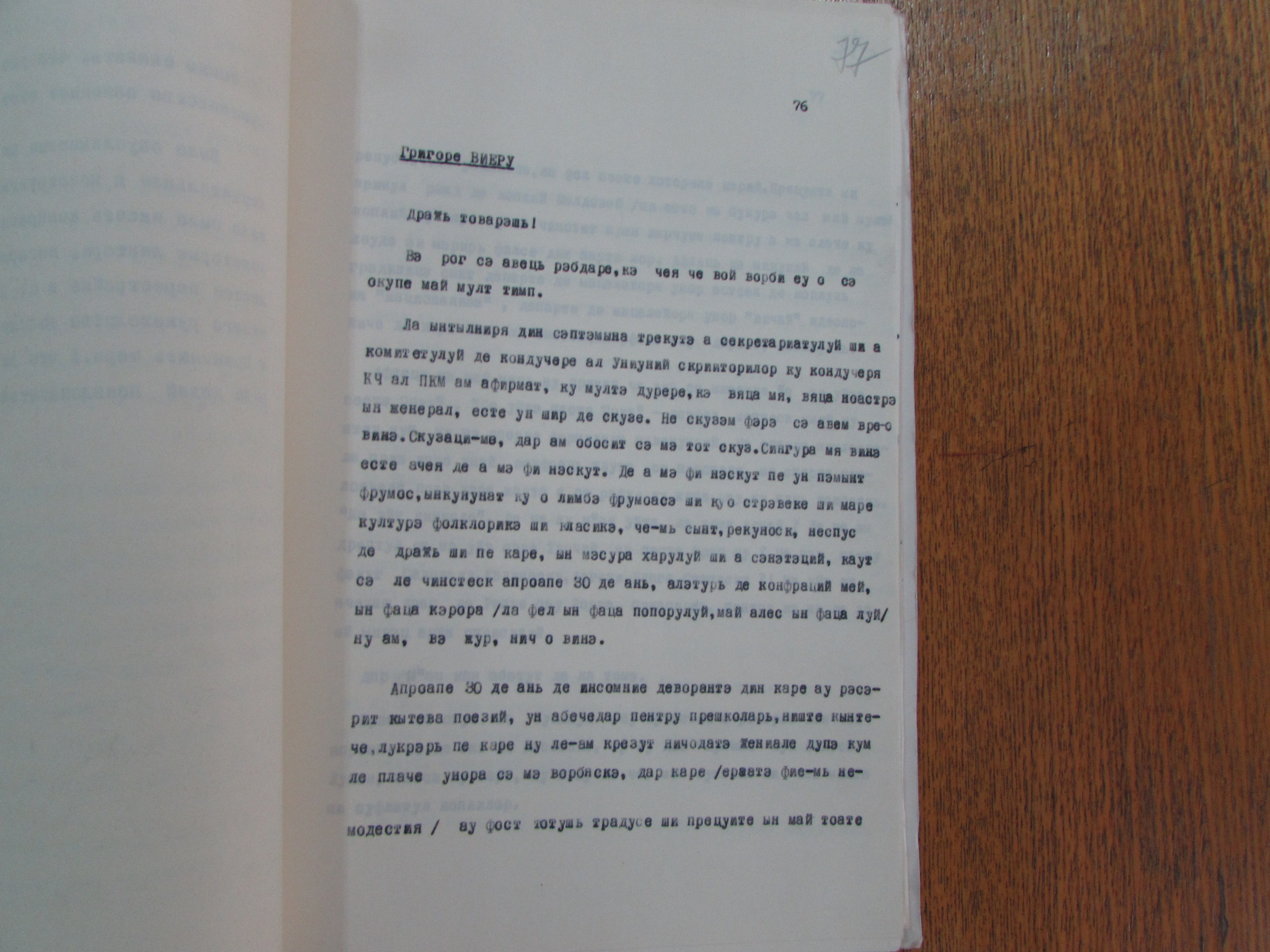 During the first half of 1987, personal and ideological tensions within the MWU were rampant. These tensions came to a head early in the year, when the long-serving Chairman of the MWU, Pavel Boțu, committed suicide. This tragic event reflected not only the unprecedented degree of personal animosities and rivalries among the writers, but also a sharpening ideological divide along national-cultural lines. The Writers’ Conference organised on 18 May 1987 became the stage for heated and acrimonious debates. These debates reflected not only a generational rupture between the “generation of the 1960s” and the writers born in the interwar period, but also the radically changed ideological circumstances during Perestroika. Some members of the MWU did not hide their open dissatisfaction with the organisation’s leaders and used the context of Perestroika to voice radical demands. Aside from the journalist and publicist Valentin Mândâcanu’s incisive speech on the “language issue,” the speech made by Grigore Vieru attracted widespread attention due to its virulence and radicalism. At the time, Vieru was a well-known poet and author of children’s books, whose texts reached a wider audience compared to most of his colleagues. Vieru was frequently attacked for “nationalism” and “ideological deviations” by the MWU’s “old guard,” most notably Andrei Lupan. Vieru thus used the conference to mount a violent attack on Lupan personally and on the “old style of leadership” within the MWU more generally. However, Vieru’s speech is notable not because of the settling of personal scores, but due to the wider issues it raised. First, he responded to the accusations of emulating and “aping” the Romanian model by “looking beyond the Prut.” He rhetorically wondered: “Why wouldn’t I look in that direction, after all? Why do I have the right to look toward Turkey, but not beyond the Prut? What harm did Sadoveanu, Călinescu, Arghezi, Blaga, Stănescu do to me?” These cultural references only emphasised his pro-Romanian position in contemporary debates. Second, while attacking Lupan for his ostensible pro-Stalinism and his earlier ”ideological sins,” as well as for his ambiguous position toward the regime, Vieru used an openly oppositional language, going far beyond the prudent rhetoric of early Perestroika. He mentioned a number of “hot” issues that made his speech subversive in the eyes of the authorities. Vieru spoke about “the disastrous situation in which the speech of our children finds itself, the pollution of our folklore, the intentional and offensive neglect of our native language on national television,” but he also emphasised the ecological crisis, the consequences of the 1946–47 mass famine, as well as the “physical and spiritual inebriation of the common man.” All these topics were to be exploited by the fledgling national movement in the following years and served as mobilising slogans for the anti-regime opposition. Toward the end of his speech, Vieru launched a rhetorical tirade against his opponent, using this pretext in order to voice a number of social and political grievances:

“Do you know that, behind our literary distinctions and prizes, we are witnessing, in broad daylight, a real linguistic disaster? Do you know how distorted and ugly is today the speech of our children, youth and even older people? Do you know that the few Moldavian kindergartens in Chișinău are full to the brim and it is impossible to enrol your child there? Do you know that, out of seventeen hours of TV broadcast every day, barely two or three, and sometimes even fewer, are reserved for TV shows in our native language?!...Do you know that our villages, which preserved our national being, are being depleted of their people and their soul?”

This radical and impassioned speech was met by the audience “with applause,” marking a change of tone and atmosphere that foreshadowed the later role played by the writers in the national mobilisation against the Soviet regime. The Writers’ Conference of May 1987 represented a turning point in the radicalisation of political discourse, with Vieru and some of his nationally oriented colleagues positioning themselves at the forefront of the emerging oppositional movement.