Radojević Danilo. “The Point of the Disputes Between Historians about Sources on Old Montenegrin History”, in Serbian, 1987. Journal Article 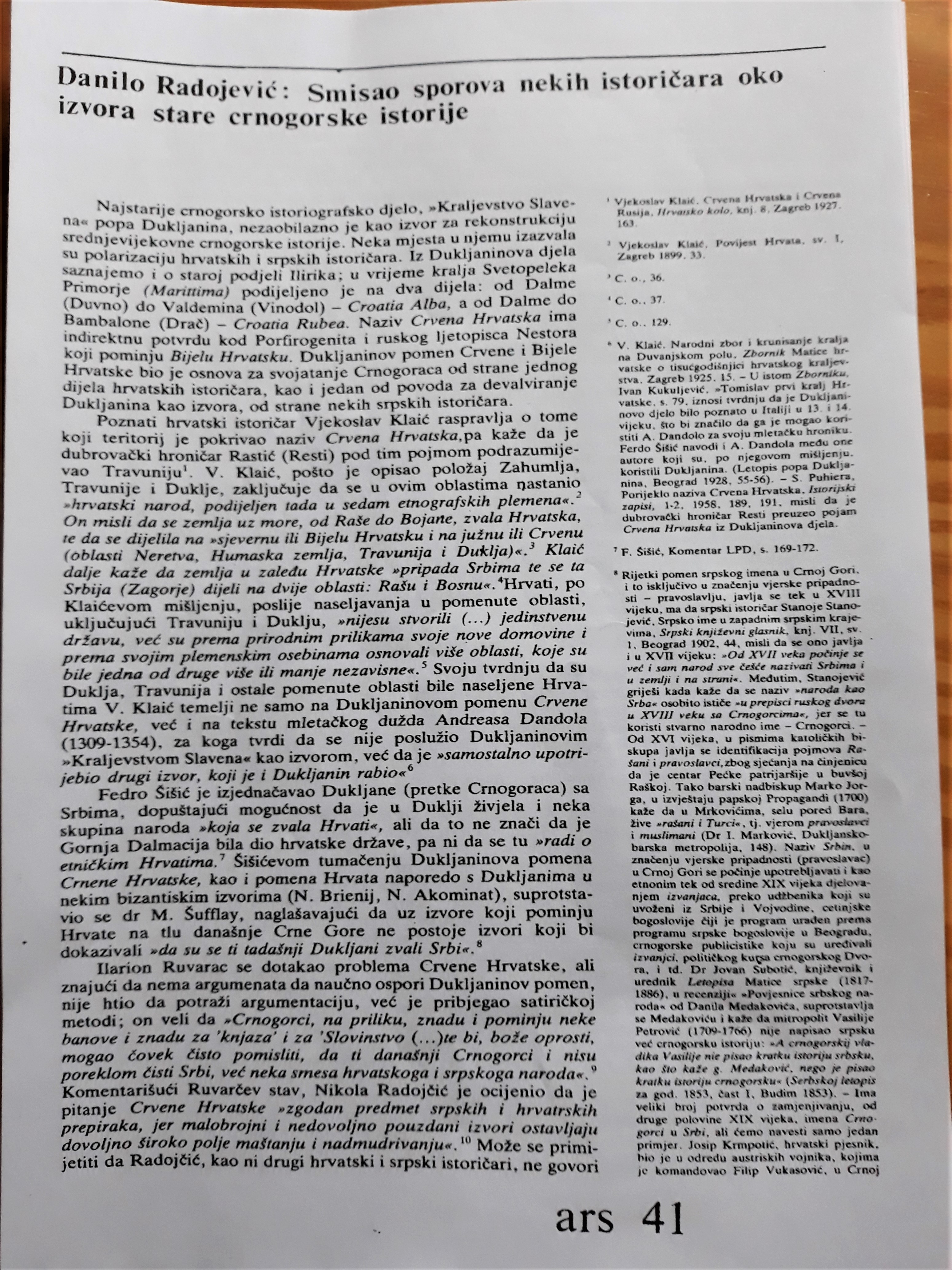 This featured item is a representative text of those published in the ARS – Review of Literature, Culture and Social Issues that dealt with the Montenegrin identity, history, and cultural heritage. Besides its predominant role as a literary journal, ARS also published texts with alternative political, social, and historical views of Montenegro around the late 1980s. The authors attempted to confront what was perceived as growing Serbian and Croatian nationalism and to present arguments on the particularity of Montenegrin history and society, thereby paving a path for an independent Montenegro.

In the article “The Point of the Disputes Between Historians about Sources on Old Montenegrin History”, Danilo Radojević criticized interpretations of medieval Byzantine historians’ texts on Dioclea [Serbian: Duklja] by contemporary Serbian and Croatian historians. Dioclea was a medieval state, which roughly encompassed the territories of present-day south-eastern Montenegro. Radojević claims that the interpretations of medieval Byzantine historical texts had been “conveniently” incomplete, imprecise, and in some cases tendentious. He further stated that contemporary Serbian and Croatian historians were taking into account only the parts of those texts that they found suitable for confirming certain preconceived theories, which always supported Serbian and Croatian nationalist agendas. In order to explain why Dioclea was the focus of disputes among historians, Radojević asserted the following:

“[…] Dioclea like crossroads, where Orthodoxy and Catholicism coincide, has become current [in debate], especially since the identification of individuals with a particular religious affiliation took place. Therefore, the negligence of the fact that Dioclea is an old Montenegrin state and the Diocleans are predecessors of Montenegrins is transpiring, and thus arises an unrealistic question – to whom does this place belong.” (Radojević 1987, 46)

Although criticizing other historians’ interpretations of historical texts on Dioclea and Diocleans, Radojević in this text does not provide evidence for his allegations about the equivalence of Diocleans and Montenegrins, which is still considered a rather contentious statement.

Radojević Danilo. “The Point of the Disputes Between Historians about Sources on Old Montenegrin History”, ARS 1:2, 41-46, in Serbian, 1987. Journal Article