Letter from the Joža Rožanković printing press addressed to the Praxis editorial board, notifying them of the cancellation of printing services, 19 March, 1975. 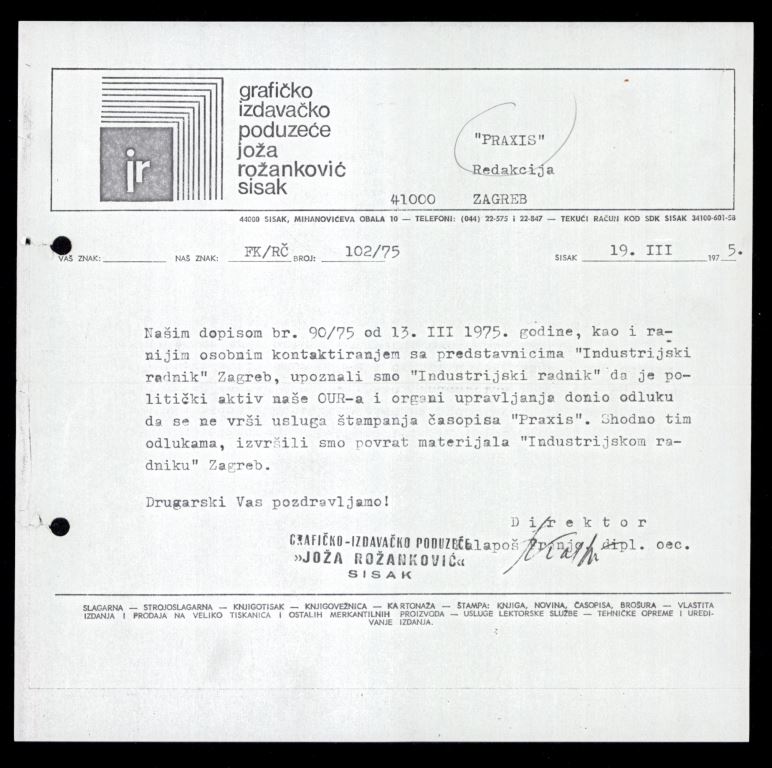 The journal Praxis, whose editorial board consisted of Rudi Supek together with Milan Kangrga, Gajo Petrović, Danko Grlić, Ivan Kuvačić, was published from 1964 to 1974, four times a year in the Croatian language. It also had international editions in English, French and German. Intellectuals gathered around the journal advocated for a neo-Marxist approach to philosophy and sociology. Soon this group was called the Praxis intellectuals (Lešaja 2014: 246), and they promoted a social system which would expand the individual's ability to act freely and creatively. From this standpoint, they criticised capitalism and its understanding of human freedoms and rights which, according to them, leads to alienation. But they also criticised the free market elements which were introduced into the economic system of self-management socialism in Yugoslavia in the mid-1960s and certain other aspects of the Yugoslav socialist system which they considered over-bureaucratized. That is why they often came into conflict with the LCY. The journal was repeatedly attacked and censored by the authorities, its financing was blocked, and even though it was not officially banned, its publishing was disabled by “self-management censorship” (Stipčević 2005: 11-12). Namely, the working people of the Joža Rožanković printing company informed the editorial board of their decision not to provide printing services for the journal anymore. The Rudi Supek Personal Papers in the Croatian State Archives (CSA) contain the letter from Franjo Kalapoš, the manager of the printing company, sent in March 1975, notifying the editorial board of Praxis that the self-management bodies and political organisation of the company made the decision that the journal would no longer be printed. The Praxis editorial board then tried to find another printer, but every single one of them refused to print the journal. That is why the already prepared issue of Praxis (6/1974) was never published. According to Gajo Petrović's testimony, “certain forums even told us not to try too hard, as all the presses received the notification and the workers in all of them were quite in agreement regarding the matter” (Lešaja 2014: 286).