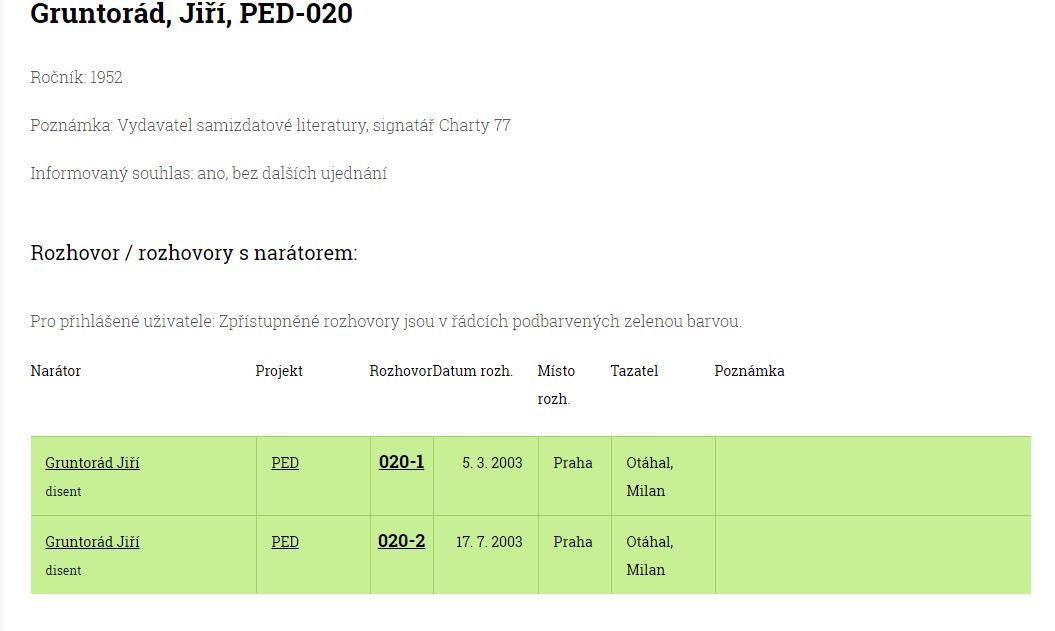 The interview with Jiří Gruntorád was carried out by Milan Otáhal in 2003 during two different sessions. The interview was conducted within the framework of the project “Elites and contra-elites during the so-called normalization period”.

The interview took place at the workplace of Jiří Gruntorád in the library Libri Prohibiti. Jiří Gruntorád wished that only Milan Otáhal asked questions because he was shy and not used to talking about his life. In both of these interviews, Jiří Gruntorád primarily talked about his dissent activity and answered questions about his private life, but only briefly, as he did not want to pursue this subject and did not consider it important.

In the first interview, he talks about his childhood, he mentions, importantly, that he never joined the Pioneer (was a youth Marxist-Leninist organization in communist Czechoslovakia. Although the organisation proclaimed to be voluntary, every child was expected to join from the age of six), although it was usual at the time, and was not even a member of the Socialist Youth League (Svaz socialistické mládeže) later. At the time when Jan Palach set himself on fire, which in his own words influenced him very much, he protested at school, for example, against the mandatory observation of Gustav Husák's speeches by turning his back to the screen. In the conversation, Otáhal and Gruntorad spoke a lot about Gruntorad´s history of dissent, his arrest, his memories of interrogations, his activities within the VONS (The Committee for the Defense of the Unjustly Prosecuted), Charter 77, etc.

This interview is by its contect and detail the unique testimony of Gruntorad's memories of not only his involvement in dissent and activity in opposition to the regime, but also the opportunity to recognize the personal and private life of this well-known and important person of cultural opposition in the former Czechoslovakia, as well as his activities after the year 1989.