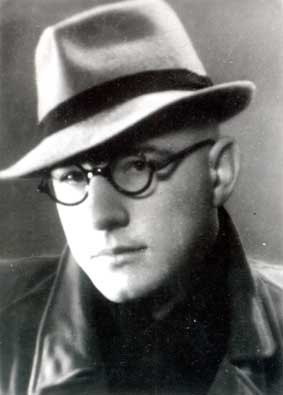 Bronius Krivickas (1919–1952) graduated Biržai gymnasium in 1938, and began his studies at Vytautas Magnus University, later - Vilnius University. He was a member of literary organisations and networks, such as ‘Šatrijos meno kuopa’, led by the famous Lithuanian writer Vincas Mykolaitis-Putinas. Krivickas was the editor of the journal Ateitis (Future) in 1938–1939, and later the editor of the newspaper Studentų dienos (Student Days). From 1944, he worked in the editorial offices of the journal Kūryba (Creative Work), and as a teacher at Biržai gymnasium. In 1945, he joined the anti-Soviet partisan movement. He became the editor of partisan newspapers such as Aukštaičių kova (The Struggle of the Aukštaičiai) and Partizanų kova (The Partisan Struggle). Krivickas was killed in 1952, during an operation by the Soviet state security service.