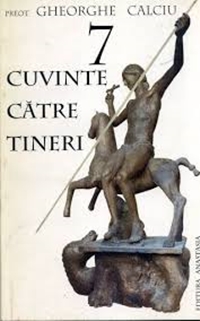 This eighty-eight-page manuscript contains the texts of eight sermons and seems to have been prepared to be sent abroad for publication. The author was a priest and professor at the Theological Institute in Bucharest, and was imprisoned between 1948 and 1964. While in the notorious prison of Pitești, he was forced to take part in the infamous re-education experiment in that prison, which turned a part of the prisoners into the torturers of the others. Tormented by such a terrible sin, Calciu-Dumitreasa tried, according to his own confession, to write about this prison experience in order to come to terms with it. However, he changed his priorities when, in the aftermath of the earthquake of 1977, the demolition of churches in Bucharest began while the hierarchy of the Romanian Orthodox Church kept quiet. It was then that Calciu-Dumitreasa conceived this series of non-conformist sermons, in which he argued against atheist education and reminded his students of fundamental Christian values, of their mission as priests who must build, and not destroy, churches in order to take care of their parish communities. Seven of the sermons were delivered by the author in the Radu Vodă Church in Bucharest between 8 March and 19 April 1978. Particularly important is the sermon of 15 March 1978, in which Calciu-Dumitreasa explicitly condemned the demolition of the Enei Church, the first church demolished in Bucharest. The sixth sermon, of 12 April 1978, was no longer delivered in the church but in front of it, for the authorities had closed the church and locked the students in their dormitories in order to impede them from attending what had turned in the meantime into an increasingly popular event. The eighth sermon was supposed to open a new cycle entitled “Christianity and Culture” on 17 May 1978, but it was never delivered due to the author’s removal from his teaching position. Continuously harassed by the secret police, in 1979 Calciu-Dumitreasa endorsed the establishment of the Free Trade Union of the Working People of Romania, which caused his arrest and imprisonment for another five years. He was released only in 1985, after intense international lobbying, especially by the United States administration, which threatened the Romanian communist regime with the withdrawal of Most Favoured Nation status. A year later, he went into exile in the United States, where he remained until his death. This manuscript was probably confiscated on the occasion of his arrest in 1979. This version of the sermons differs slightly from the post-communist published volume because it mentions the persons who were responsible for the interruption of his cycle of sermons in 1978.