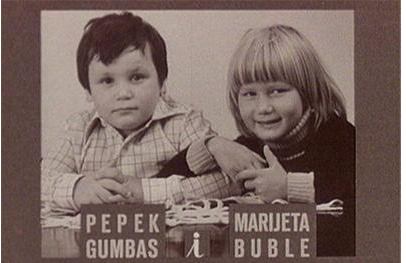 In the period from 1969 to the end of the 1970s, Nikša Fulgosi, as to do so in Yugoslavia, recorded a television series on sexuality for TV Zagreb (today HRT) under the title of Ljubavni jadi Pepeka Gumbasa i Marijete Buble [The Romantic Problems of Pepek Gumbas and Marijeta Buble]. The Monty Python-approach revealed "a master of common humour, avant-garde direction and promoter of liberal attitudes"; a filmmaker who – in times of "ideological eligibility" – mocked all manner of religious, political, and sexual hypocrisy. The provocative contents of the sketches showed women holding banners such as "We are being denied by kilometres of penises" and "Our right to be sexually exploited," along with a multitude of other "diversions," such as photographs of politicians who behave like sheep. According to sociologist Alexander Štulhofer, Fulgosi "used sex to criticize the bureaucratized political system" (Danko Volarić 2014).

Fulgosi shot and completed 13 episodes, of which only two were aired. Despite the end of the broadcast, Fulgosi continued to shoot new episodes (37 in total) which were also never aired. This unusual relationship between the creator and the "censor" illustrated the peculiarities of the Yugoslav socialist model, in which creative freedom was possible, but at the same time disproved as inadequate.