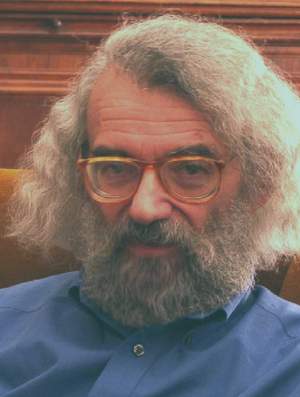 Mihály Csákó (1941–) is a Hungarian sociologist and professor. He studied philosophy and Hungarian language and literature at Eötvös Loránd University (1959–1964). From 1964 to 1970, he was an assistant instructor in the Philosophy Department, but he lost his job because was politically compromised. From 1970 to 1980, he worked as a colleague at the Social Research Institute of the Central Committee of the Hungarian Socialist Worker’s Party, where he mainly researched the education of apprentices. He had to leave his workplace, because he signed the Charta Declaration and created a non-official registry office. In 1981, he was given a position at the Centre of Information Science Education and Information of the Central Statistical Office. In 1985, he became active as a liberal professional sociologist. In 1989, he was made a professor in the Institute of Sociology and Social Policy of Eötvös Loránd University, where he served as director in 1994–1995 and 1996–1999. Between 1990 and 1992, he served as caretaker of the Independent Democratic League. As of 2009, he has worked as a professor at the Wesley János Theological Academy.