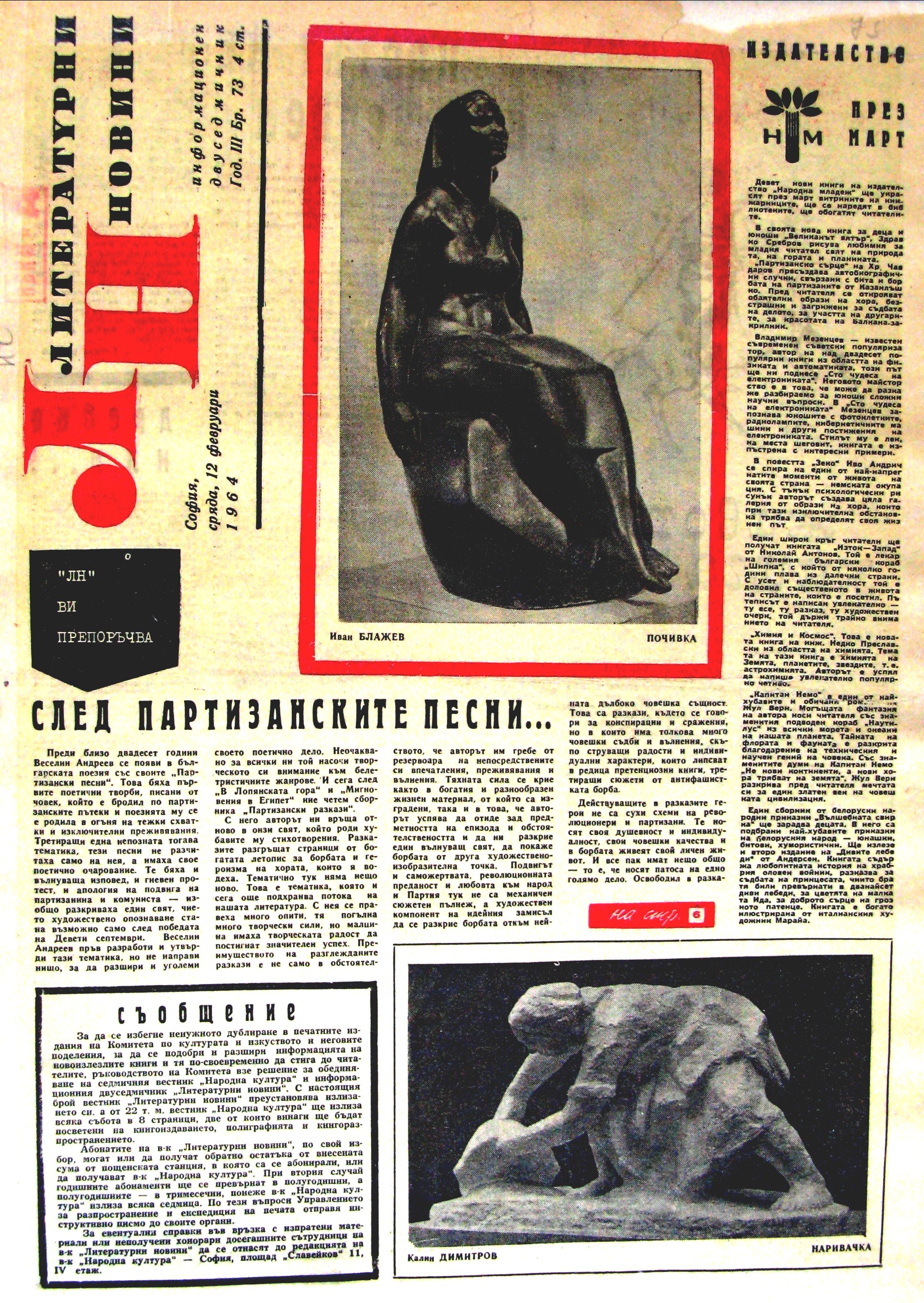 The last, 73rd, issue of bi-weekly newspaper (Literaturni novini" ("Literary News") was published on February 2, 1964, almost three years after its first issue came out on May 24, 1961. Then the newspaper was discontinued by the state because it was declared "harmful and anti-party".

In 1961 the head of the Bulgarian communist party, Todor Zhivkov gave his personal permission for the launch of this new literary newspaper in order to show his positive attitude towards intellectuals and to demonstrate the democratization of the artistic sphere. Vassil Akyov was selected as editor-in-chief of the newspaper. He gathered in his team people expelled from the "Narodna mladezh" ("People's Youth"" newspaper for their "anti-party behavior", such as Stefan Prodev and Simeon Vladimirov; the brave satirists Krum Valkov and Radoy Ralin; the then unknown, yet promising writers Ivan Paunovski, Yordan Vassilev and others. Akyov himself had been dismissed as head of the cultural department of the Communist Party's daily newspaper “Rabotnichesko delo" ("Workers deed”).

The new newspaper broke old stereotypes and personality cult clichés both in its graphic design and writing. It presented new books with poetry, fiction and literary criticism; it featured literary works, which had not been allowed to be printed (for example, the newspaper for the first time after September 9, 1944 published poems by the hitherto silenced poet Atanas Dalchev); it developed modern views on publishing and opened a column for young and talented authors; it also opened doors to contemporary Western European literature.

All this predetermined the fate of the newspaper: the newspaper was banned without a scandal through a "silent murder". With the argument "to avoid unnecessary duplication [...], to improve and expand the information ..." the state order to unite "Literaturni novini" with the loyal to the regime weekly "Narodna kultura" ("People's Culture)". Zhivkov personally announced the ban of the newspaper to its staff. According to preserved memories Prodev said: "Comrade Zhivkov, the biggest mistake is to stop a newspaper. Every stopped newspaper remains in the history of a country!" Stefan Prodev and Yordan Vassilev acquired the text of the decision of the Secretariat of the Central Committee of the Bulgarian Communist Party to stop the newspaper and put it on the first page of the last issue - „Message" in black letters in the style of newspaper obituaries.

Although the editor-in-chief and the newspaper's associates were not subjected to repression, the ban on the newspaper functioned as an intimidation of the intelligentsia, imposing narrow frames on acceptable journalistic behavior.