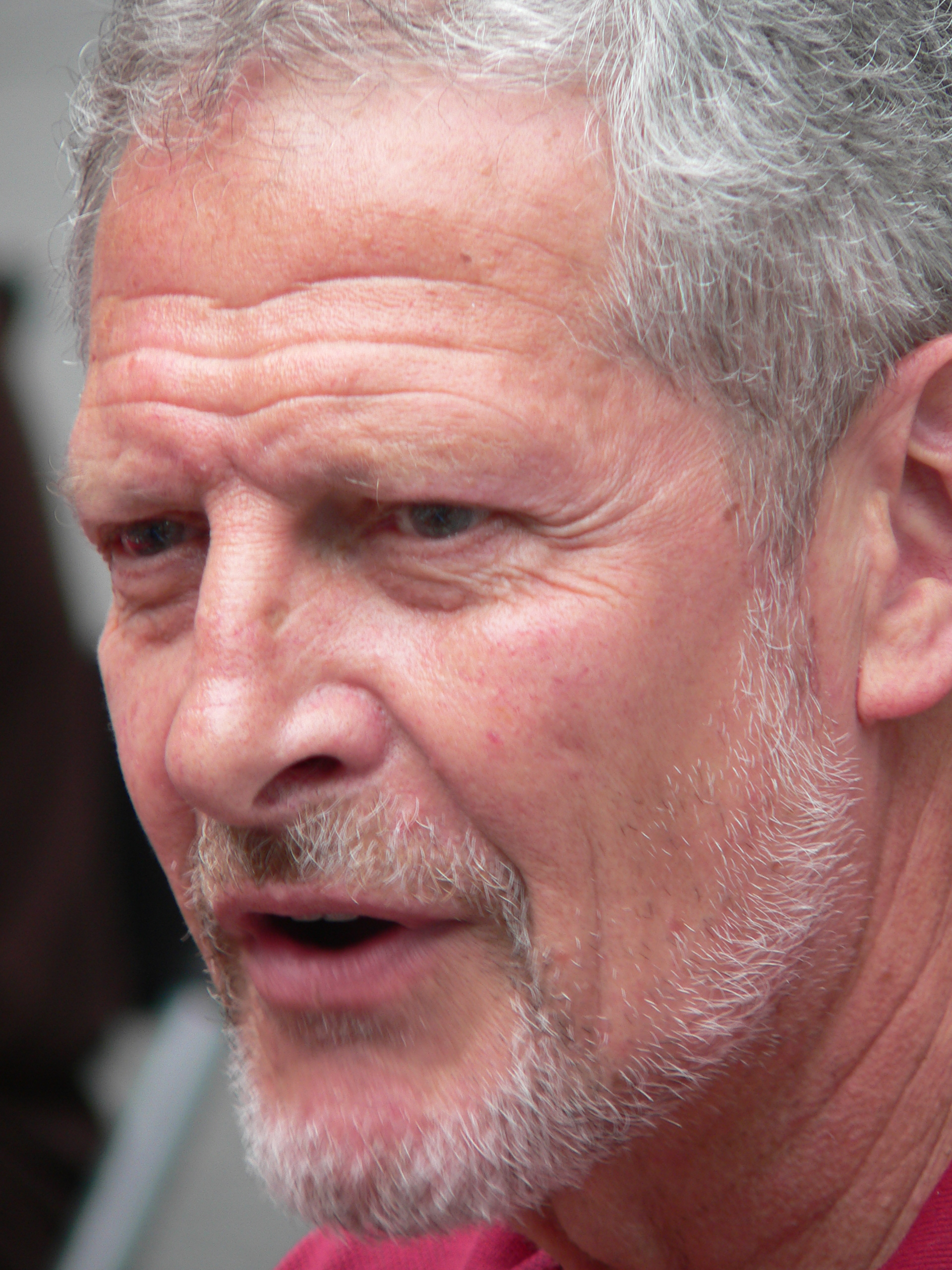 Lazar Stojanović was a director, journalist, intellectual, anti-war activist and one of the most prominent cultural dissidents of socialist Yugoslavia. He spent several years in prison. Lazar Stojanović graduated from the Academy for Film, Theatre, Radio and Television in Belgrade in 1971. In parallel to studying at the Academy, he was near completion of a degree in Psychology at the Faculty of Philosophy.

Stojanović became politically active in the early 1960s, and in 1966, he joined the Communist party from which he was excluded in 1972. He explained his Party membership as stemming from his interest in politics and the fact that many other youth from his millieu joined the Party in the hope that this would be one of the ways societal change could be brought about. Stojanović was active in the Yugoslav student movement and was one of the leaders of the organizational board at the Academy during the protests in 1968. In the interviews with COURAGE, Stojanović considered the broaching of questions of political, sexual and gender rights and freedom, relevant issues to this day, and as the most important legacy of the 1968 student movement. During this period, he was both an active author for and later editor of student magazines “Student” [The Student] and “Vidici” [The Views] (1968-1971). The first controversy he caused while editor of “Student” when he published “The letter to young Gorani: go forth in forestation of the Otok” in the “It will get better” column. This was a satirical critique of the political detention camp “Goli Otok” [Bare Island]. In 1971, Stojanović was again at the heart of a larger scandal, this time while editor of “The Views” when he dedicated one issue to the political, legal and press systems of the Third Reich. The cover of the magazine showed a post stamp depicting Adolf Hitler in a frighteningly similar way to one of Josip Broz Tito. The intention was to compare and highlight the similarities between the two cults of personality and between Nazi German and socialist Yugoslav propaganda. This issue of “The Views” was instantly banned while Stojanović was arrested. In the end, however, he was not put on trial.

At the end of the 1960s, Stojanović dedicated himself to the study of film. He devoted his first student film to a critique of the communist regime. This film, “The Healthy Offspring” [Zdrav podmladak] ridiculed the League of Communist Youth of Yugoslavia (SKOJ) [Savez komunističke Omladine Jugoslavije] and its labour actions. When Stojanović was later arrested, this film was confiscated and remains lost to this day. His second work, produced for his graduate final project at the Academy, “Plastic Jesus”, was filmed in 1971. Although the film was never screened publicly in Yugoslavia, it was produced at a time in which Party-infighting was calling the regime into question. The subsequent backlash led to supression of artistic liberties. Against this background, Stojanović’s trial and prosecution of his film were used as warnings to other potentially critical artists. Stojanović spent full three years in prison, between 1972 and 1975. He was accused and convicted of the criminal offense of “hostile propaganda”. His verdict (delivered on 14 June 1973) stated that the artist “represented the socio-political situation in the country maliciously and falsely,” that he depreciated the socialist revolution, its fighters and self-governing socialist system, and that he had insulted the figure of the President, Josip Broz Tito, “the most distinguished representative of the Revolution and of the construction of the socialist social relations.” After serving his sentence of three years of prison, Stojanović was released in 1975. His passport was withheld, similarly to other persecuted artists and intellectuals of socialist Yugoslavia. Only a few years later, in 1978, amid mounting international pressure did such artists and intellectuals have their passports returned. Stojanović seized this opportunity to leave the country. He spent the following years in London, Afghanistan, India and Iraq, with several shorter stays in Belgrade.

In 1976, before being able to leave the country, Stojanović took part in the creation of the “Open University”, together with Ilija Mojković, Voja Stojanović and Vlada Mijanović. The “Open University” was a specific form of intellectual oppositional activity, modeled after similar concepts in Czechoslovakia and Poland, and organized as gatherings in private apartments with discussions regarding different topics. Apart from the political issues, discussions of historical and philosophical topics as well as of the sciences were held. The “Open University,” as Stojanović noted in an interview in the weekly “The Time” [VREME] on 16 February 2016, functioned for several years with 750 people passing through it. A police raid in the apartment of Dragomir Olujić in 1984 marked the end of the “Open University”. On that occasion, Lazar Stojanović was also arrested; yet, he was released a few days later without charges being filed. However, the state began proceedings against six other members (Dragomir Olujić, Miodrag Milić, Pavlušk Imširović, Gordan Jovanović, Milan Nikolić i Vlade Mijanović). Nevertheless, since the witnesses refused to testify and owing to public pressure, the charges were dropped.

In the 1980s, Stojanović returned to Yugoslavia and worked as a director in a theatre. He was also one of the founders of “The Time” [VREME] magazine for which he also wrote as a journalist. From the beginning of the 1990s, he was an anti-war activist. He worked as journalist for “Ship” [Brod] radio, and later as a freelancer for “Radio France Internationale”. Afterwards, he left the country and moved to New York City. In the US, he worked as a translator and was a guest lecturer at several American universities. During the conflict in Kosovo at the end of the 1990s, Stojanović worked for the OSCE and UN missions. During this period he also made several documentaries: “Serbian epic” [Srpska epika] in 1993, “Almost Serbs” [Približno Srbi] on the status of Roma population in 1997, “The rise and fall of general Mladić” [Uspon i pad generala Mladića] in 2005, “The life and adventures of Radovan Karadžić” [Život i priključenije Radovana Karadžića] in 2005 and “The Scorpions - A scrapbook” [Škorpioni-Spomenar] on the crimes of Serbian paramilitary formations in 2007. Since 2011, he lived and worked in Belgrade.

Stojanović claimed that his dissident activism was constant. Even after being released from prison, he continued to be active socio-politically. However, after he was expelled from the Party, he was never again a member of any movement or of any official organization. In the interviews with COURAGE, he described the dissident movement as a network of individuals who were friends connected by their shared political views. They were not, however, a structured and organized opposition, but they maintained contact and shared critical attitudes towards the socialist regime. In Stojanović’s opinion, there were at most two hundred active individuals who can be considered dissidents and a cultural opposition. In an interview for the newspaper 24sata on 29 November 2016, he expressed his attitude on repression, stating that it “only shows the real boundaries of civic freedom, especially the freedom of thought and expression.”

He believed that the borders of freedom should always be reconsidered and shifted, and that he dedicated his life to this cause. Stojanović stated his opinion on courage in the same interview: “Courage is a mental attitude, not a part of the character. It neither presupposes education nor talent. It is not made of testosterone but of beliefs and decisions. You are not born with it – you either learn it or you don’t. You choose it or it chooses you. Of course, the authors are brave, when they decide to be. Everybody has to decide for themselves.”
Stojanović believes that studying the dissident movement is of great importance for understanding socialism but also, to a large degree, to understand the present. He considers learning about the culture of resistance crucial, especially for the young and future generations. In the interview with our researcher conducted on 10 December 2016, Stojanović maintained: “Utopia stands for the only solid bridge, the only trodden path which takes you from the past to a future of any kind, because if you do not reflect on utopia, you have no idea of future whatsoever."