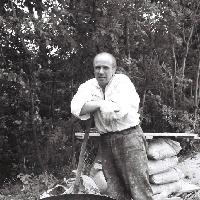 Algirdas Mykolas Dobrovolskis (1928-2005) was a Catholic priest and Capuchin friar. He was well known as a charismatic religious teacher, who followed strictly an ascetic way of life.

Dobrovolskis (later Fr Stanislovas) completed his studies at the Kaunas Jesuit gymnasium (secondary school) in 1936, and entered the Capuchin friary in Plungė. He completed his studies at the Kaunas seminary in 1944, and became a Catholic priest. During the Second World War, he saved Jews from Nazi persecution. He served as a priest in Plungė until 1947. In the same year, he was transferred to the Capuchin parish in Pertašiūnai near Kaunas. Dobrovolskis started to preach sermons in various Lithuanian churches, in which he called on people not to give up resisting Soviet rule, to avoid collaborating with Soviet state security structures, and to support the anti-Soviet armed rebellion. In 1948, he was arrested and sentenced to ten years in prison. He was held in Inta (in the Komi district of the Russian Federation). He was released in 1956, but arrested again in 1957, and sent to Vorkuta (in Siberia). After he was allowed to return to Lithuania in 1957, he served as a priest in various districts in Soviet Lithuania. He was permanently persecuted by Soviet state security, which very often searched his flat. During these searches, the KGB confiscated his sermons and translations of Rilke’s poems.

While he was serving in Paberžė, Dobrovolskis disseminated banned literature, such as the Chronicle of the Lithuanian Catholic Church. Paberžė became well known among anti-Soviet groups and students. Fr Stanislovas was again investigated by the KGB in 1976.

Since 1968, Vladimir Dodig Trokut has been a member of the Association of Croatian Artists. His name and work is presented in several encyclopaedias and dictionaries and so far he has staged more than 650 exhibitions, interventions, performances and installations at home and abroad. In his own words, "from 1968 I was declared an anarchist and co-founder of the Anarcho-liberal Croatian Party of Split." He was also the leader of other informal groups: the Red Peristyle Factional Group, Group 31, and Manifesto 72; he is the founder of the conceptual and post-conceptual no art and black-it-art. He has spent his entire life in Croatia. He did not have a passport because, as he says, "he was at war with the Communists. Not with bombs, but with words and deeds instead (…) First I broke that country (communist Yugoslavia) and built this one (Republic of Croatia). Now I have started to crumble this one as well."

The field of his work is very broad, though there is relatively little information on all of his activities. He states that he has been involved in twenty-four different types of art. He has also written poetry. From literature he moved to anthropology and ethnography and then to art. In the creative process, he first seeks to feel the object and its energy, which then turns into a new form; instead of creating something out of nothing, Trokut works with existing objects and turns them into something new. For example, he creates an image using the colour of the discarded, but painted canvas; although he studied as a sculptor in traditional media, he prefers working with found objects, giving them a new value. For him, art is an area of inquiry; his approach calls into question categories such as the durability, value and distinctiveness of a piece of art.

In 1968, he started to set an entirely new direction for visual art, so-called black art (black it out). Otherwise, he says he is "a shaman, art collector, gallery owner, museologist, donor, theorist, lecturer, author, fashion stylist, founder of the Anti-museum Headquarters, anti-war groups and special purpose units (Heritage Preservation Unit) who saved more than a thousand artworks in war-torn areas (on all sides).”

However, he is best known for the Anti-museum project, which includes the No Art Collection as well. 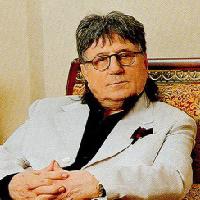 Mihai Dolgan (b. 14 March 1942, Vladimirești / Vladimireuca, Sângerei district – d. 16 March 2008, Chișinău) was a prominent Moldavian composer and singer, who became famous as the founder and uncontested leader of the musical band Noroc in 1966. Dolgan’s family was deported to the Buriat ASSR in 1949, as part of the wave of massive deportations affecting the MSSR during the late 1940s and early 1950s. After his family returned to Soviet Moldavia in 1956, Dolgan worked as an accordionist in his native Sângerei (1958–1959). In the late 1950s, he enrolled in the Ștefan Neaga Musical College in Chișinău (1959–1962). Although he was not allowed to study the accordion due to the lack of this specialisation at the college, he became one of the most accomplished accordionists in Soviet Moldavia, being part of several groups organised under the aegis of the Chișinău Philharmonic Orchestra (1964–1967). With the crucial support of the Philharmonic’s director, Alexandru Fedco, in 1966 Dolgan was allowed to form his own band, which was meant to perform “Moldavian songs with a modern rhythm” (as the Soviet press of the era phrased it). In fact, Dolgan’s initial idea was to create a jazz band, following his earlier experience as a jazz performer during his service in the Soviet Army, when he had been a member of the military orchestra in Kiev (1962–1964). However, under the influence of his colleagues and fellow Noroc members Valentin Goga and Alexandru Cazacu, Dolgan gradually understood the public’s demand for contemporary “commercial” music. Noroc thus came under the sway of British and American beat and rock music, notably The Beatles. Dolgan’s band pursued a “double strategy” during its performances within and outside the MSSR. While in Soviet Moldavia the singers had to abide by strict censorship rules and a pre-approved official programme, during their shows in other Soviet cities they deviated significantly from this model, peppering their performances with fashionable Western hits and their own songs. This strategy ultimately backfired in the summer of 1970, during Noroc’s tour of Ukraine, when the Party authorities in Odessa and Vinnitsa were appalled by the violent incidents at their concerts and by the “unacceptable” contents and stage behaviour of the band. Noroc was dissolved by a special order of the Minister of Culture on 16 September 1970. After Noroc’s banning in the MSSR, Dolgan worked in various philharmonic orchestras in Russia and Ukraine (notably Tambov and Cherkassy, 1971–1974). In 1974, he was allowed to return to Chișinău and to form another musical group, called Contemporanul (The Contemporary), this time under closer supervision by the authorities. Although the new band included many of the original Noroc members (notably, the brothers Alexandru and Anatol Cazacu and Ștefan Petrache), it never reached the heights of popularity achieved by its predecessor. Dolgan continued to enjoy a high reputation in musical circles throughout the 1970s and 1980s, while Contemporanul helped launch a number of prominent Moldovan artists, some of them still active. However, he was never entirely “rehabilitated” in the eyes of the communist regime, receiving public recognition only during the Perestroika period, when he was made a People’s Artist of the Moldavian SSR (1988). In the late 1980s, Dolgan and his colleagues were also active in the national movement. In 1987, they launched one of the first patriotic songs with a clear pro-Romanian message – Basarabia (lyrics by Dumitru Matcovschi, music by Mihai Dolgan). Although Dolgan collaborated, during his musical career, with a number of politically conscious poets and song writers (e.g., Andrei Strâmbeanu and Efim Krimerman), he rarely expressed an openly anti-Soviet stance. However, as he noted in a later interview, music was for him an unmistakable form of protest: “How can one play The Beatles and be a communist at the same time?” Dolgan’s music was emblematic for the tendency of the “last Soviet generation” to live outside of official constraints and norms. He remained famous as the author of such hits as: De ce plâng ghitarele? (Why the Guitars Cry), Dor, dorule (O, Longing), Cântă un artist (An Artist is Singing), Primăvara (Spring), etc. In the 1990s, Dolgan became less visible as a public figure, struggling to keep afloat the revamped Noroc project (Contemporanul had reverted to the old name in 1985), but with little success. In 2001, he was decorated with the highest Moldovan state distinction, the Order of the Republic, for his entire musical career. Two years after his death, in 2010, a commemorative plaque was installed on his apartment building in central Chișinău (executed by the sculptor Valerian Doicov). Mihai Dolgan remains one of the most original Moldavian musicians of the last fifty years, symbolising the creative synthesis of local musical traditions and Western-style modernity.

Matthias Domaschk was a member of the Jena City Youth Parish (JG). After signing the petition against the expatriation of Wolf Biermann in 1976 he had his first experience with the Ministry for State Security of the GDR. He was barred from completing his school leaving exam (Abitur), his friends were involuntarily deported to West Germany and he was drafted into the National People’s Army. He continued to invest his time in the ‚open work‘ of the Youth Parish. Although the State Security Service portrayed him as a conspiring underground activist, this was far from the truth. Following long interrogation sessions on the 12 April 1981, Domaschk passed away under still-unsolved circumstances. According to the official report, Domaschk committed suicide, however, his friends disputed this and numerous protests were organized.

Domaschk’s death radicalized youth opposition to the GDR; his name became a symbol and manifested into legal proceedings which continue to this day. Both „Artists for others“ and the Berlin Environmental Library have named their collections detailing the History of Opposition and Non-violent resistance in the GDR after Matthias Domaschk. 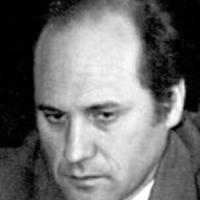 Domokos, Géza
Géza Domokos (1928–2007) graduated in Moscow from the Maxim Gorky Literary Institute. After returning to Romania, he served as editor at several journals and newspapers, and in 1961 he became editor-in-chief of the minority department of the Literary Publishing House (Editura pentru Literatură). In 1968–1969, he was deputy editor-in-chief of Előre (Forward), a nationwide Hungarian-language Party newspaper. From 1970 until August 1990, he was the director of the minority publishing house Kriterion. For a time, he was the vice-president of the Writer's Union of Romania, and between 1969 and 1984 he was an alternate member of the Central Committee of the Romanian Communist Party. Géza Domokos was probably the most active Hungarian intellectual in a senior position in those times. After the 1989 revolution, he was among the founders of the Democratic Alliance of Hungarians in Romania, the minority party of which he served as first president until 1993.
czytaj więcej
26 - 30
«« poprzednia strona 1 2 3 4 5 6 7 8 9 10 ... 10 11 następna strona »»