47 znalezione osoby
Obiekty na stronie:       «« poprzednia strona 1 2 3 4 5 6 7 8 9 10 następna strona »»
Grygar, Milan
Milan Grygar is a Czech painter and graphic designer. He studied at the Academy of Arts in Brno and the Academy of Applied Arts in Prague. His work mainly focuses on the relationship and links between the visual and aural aspects of artistic expression. In 1965 he created his first acoustic drawing. Grygar recorded the emergence of these acoustic drawings on tape recordings. Since the end of the 1960s he has also created “tactile” acoustic drawings, where he joined sound with the gestures of the human body. During the mid-1960s, he created a series of conceptual scores based on acoustic drawings. At the end of the 1980s, Grygar returned to painting (the series Black Paintings, Polemics with a Square, Antiphone), but where the role of sound continues to be important.
czytaj więcej
Grünberg-Soldatova, Ludmilla

Ludmilla Grünberg-Soldatova was the second wife of Sergei Soldatov. She edited many of his publications. After his death, she edited and published a 15-volume collection of his works in 2004-2006. In accordance with Soldatov's wish to keep his papers in Estonia, she sold them to the National Library of Estonia in 2006.
Ludmilla Grünberg-Soldatova is not a public figure in Estonia, and thus there is little information available on her.

Mērija Grīnberga Jr (1909-1975) was a member of the Grinbergs-Grosvalds family. This family was one of the most prominent families in the political and cultural life of Latvian society until 1940. From October 1944 to February 1946, she accompanied the most valuable items from the main Riga museum collections evacuated by Nazi Germany's state institutions to the Opava region in the present-day Czech Republic. Thanks to her efforts, most of the collection was preserved and returned to Riga, although she could not prevent the loss of some items through looting and transport (initially the collections were packed in approximately 700 boxes, she returned to Riga in February 1946 with 406 boxes). Her efforts were not acknowledged, she was interrogated by the security services, and in 1950 she was fired from her job at the museum, and had to work in a factory until 1958, when she found a job as a librarian in the State Museum of Latvian and Russian Art (now the Latvian National Museum of Art), where she worked until her death. 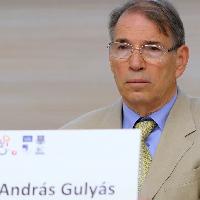 He was born in Budapest in 1944. Having completed his studies at the Ferenc Rákóczi

Secondary School, he began to pursue studies at Eötvös Lorand University Budapest (ELTE). He finished a degree in Spanish and Russian Language and Literature in 1967. He began his career by teaching foreign languages at the Miklós Radnóti Teachers’ Training Secondary School of ELTE for five years.

He became a member of the staff of the Hungarian Ministry of Foreign Affairs in 1970. As a young diplomat, first he was sent to fill foreign service posts in Brazil, Peru, and Mozambique. He was then appointed to serve as the Hungarian ambassador to the civil war-torn country of Angola in 1983, where he served for four years. Returning home in 1987, he was appointed Head of the Press Department of the Hungarian Foreign Ministry, a post which he kept under the first freely elected government in 1990. One of his most challenging tasks in the period of transition was to set up and run the International Press Center for the first democratic Hungarian general elections of May 1990, providing service and infrastructure for more than 2,000 correspondents of the world media.

In 1991, he became part of the Hungarian foreign service again as the Hungarian Ambassador in Portugal. Returning home in 1996, he became Foreign Policy Advisor to Árpád Göncz, the President of the Hungarian Republic until 2000. He continued working in this position during the official terms of President Ferenc Mádl and Preident László Sólyom, as well until 2010; in the meantime, he worked for four years in Barcelona as the leader of the Hungarian Chief Consulate. In 2010, he became the Chief-Secretary of Ex-President Árpád Göncz. He has been working as the Chairman of Árpád Göncz Foundation since 2013.

As a diplomat, he was member and leader of Hungarian delegations at a number of conferences and other events of the UN, UNESCO, CSCE, V4, etc.

As a literary translator, he has translated novels and stories by Mario Vargas Llosa, Alejo Carpentier, Jorge Amado, and other authors from Latin-America, Spain, and Portugal.

His wife Zsófia Vajkai is a museologist and ethnographer. They have three children and twelve grandchildren.
czytaj więcej
Gyenis, András SJ
Gyenis András SJ (1901-1965) was a Hungarian Jesuit monk, teacher, and historian. He was born in Tamási. He joined the Society of Jesus in 1918. He graduated in Kalocsa, then he studied philosophy in Szeged and theology in Innsbruck. He was ordained as a priest in 1931. He was a teacher in Pécs and Szeged. He founded the Archive of the Jesuit Order Hungary in 1934 and wrote several studies as the official historian of the order about the Jesuits.  From 1935, he was a teacher at the Jesuit Academy in Budapest.  In 1947, he moved to Buda, then to Szeged. He was deported to Jászberény in 1950. After his release, he had to work at a pipe factory in Budapest, where his health declined. He became a sacristan and tried to subsist by doing translations. He died in Budapest in 1965.
czytaj więcej
36 - 40
«« poprzednia strona 1 2 3 4 5 6 7 8 9 10 następna strona »»