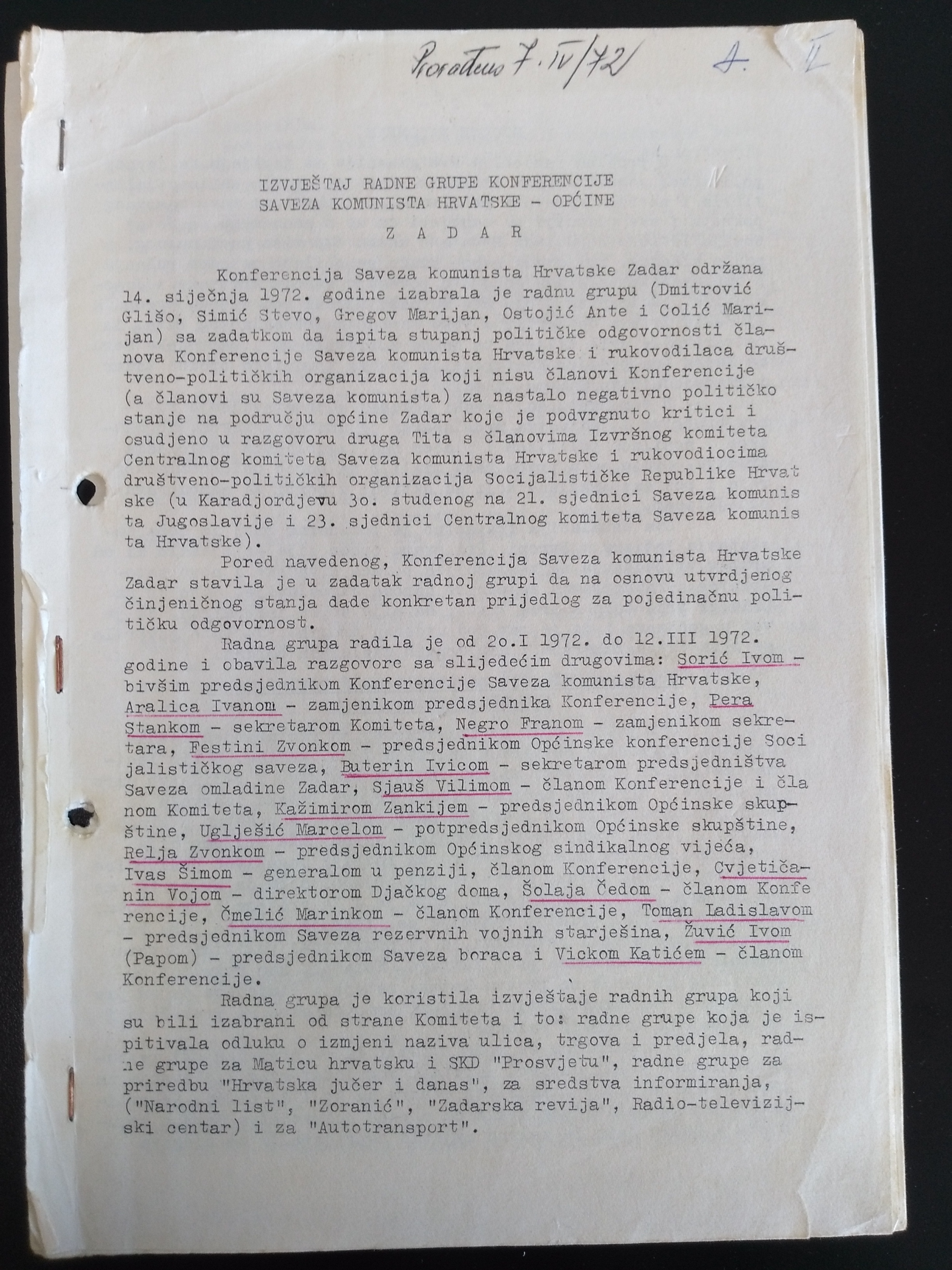 In early 1972, the Municipal Conference of League of the Communists of Croatia (LCC) in Zadar appointed a separate working group with the task of interrogating and assessing the political responsibility of 16 party members accused for escalating the “mass movement” in the city of Zadar.

As most of the reformist communist leaders at the republic (Miko Tripalo and Savka Dapčević Kučar) and local level (those who were supporters of Tripalo and Dapčević-Kučar), Ivan Aralica resigned from his post as deputy chairman of the Municipal Conference of LCC - municipality of Zadar in the course of December 1971. Although not a single incriminating word was found in his texts and statements, the working group of the Municipal Conference conducted an inquiry and found evidence against him:

A) as a deputy chairman of the Conference of LCC of the municipality of Zadar, Aralica did nothing to prevent nationalist-chauvinist discussions at conferences, he participated in discussions in which he positively emphasized the activities of Matica hrvatska (MH), he did not condemn individual nationalist outbursts, he submitted papers in which he supported the endeavours of the [Croatian] national movement;

B) at the event “Croatia Yesterday and Tomorrow,” he persuaded the organisers to invite the writer Petar Šegedin regardless of his political qualifications; did not see anything negative in the “politicization of the masses,” although it was clear that this was the heart of the ideology of the mass movement;

C) as president of the MH branch in Zadar, he actively participated in its work and in the creation of its policies, and in the establishment of the special committee of MH in Nin and other villages. Although he knew that MH was turning into a political organisation, he positively assessed its work, although he should not have done so as a political leader;

D) he actively participated in the organisation of the event “Croatia Yesterday and Today” together with representatives of the League of Socialist Youth. The political consequences of this event are very well known;

E) he supported the student newspaper Zoranić and those standpoints in line with the mass movement;

F) he was engaged in overcoming the resistance of the editorial board of the weekly Narodni tjednik (People’s Weekly) in order to subordinate them to the attitudes and needs of the political forces in power;

G) he was an active member of the committee to rename streets and squares, which also had political consequences (Aralica 2014, 128-129).

Although the party cell of the organisation where he worked (the Pedagogy Gymnasium in Zadar) did not find any culpability in his actions, the working group concluded that “his contribution to the escalation of the ‘mass movement’ was immense” (Aralica 2014, 129). Because of this, Aralica was suspended from the League of the Communists of Croatia in May 1972.