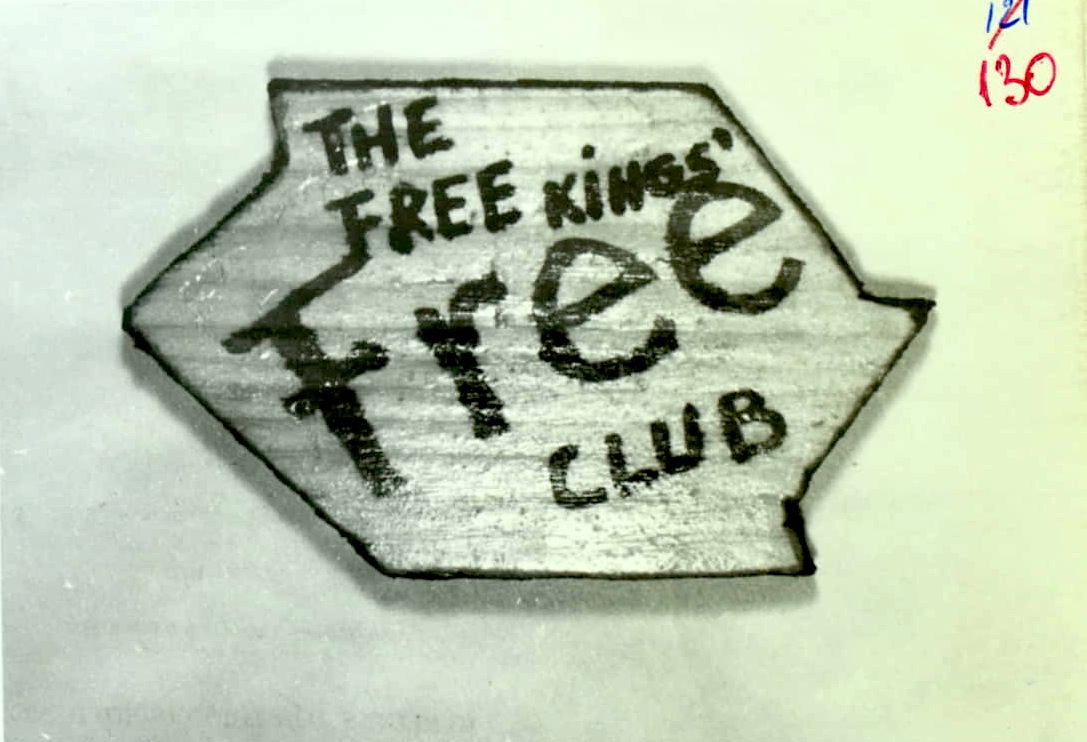 Clubul Regilor Liberi (The Club of the Free Kings) was a group of fourteen- to sixteen-year-olds created in Brăila in July 1971. Silviu Puiu Apostolescu was the initiator of this group, which included thirteen other members. Some members, among them Marinică Odagiu, Constantin Vintilă, Georgel Odagiu, Alexandru Cuza, and Eugen Mircea, were close friends of Apostolescu. The club was created with the purpose of hanging out together and listening to the musical broadcasts of Radio Free Europe, especially to Cornel Chiriac’s programme Metronom. The members defined their club as hippy and imitated the hippy subculture in terms of their outfit and opposition to mainstream society and the political regime. Consequently, the initiator of the group, Puiu Apostolescu, created for each member a wooden badge with the name of the group and their English nickname. Besides, all agreed to wear a yellow T-shirt and an insignia with the name of the group and a flower. The cultural opposition of The Free Kings was inspired by the musical programmes, especially Metronom, which the Romanian department of Radio Free Europe (RFE) broadcast. Through listening to foreign music broadcast by a radio station officially banned in Romania, they gradually developed a critical stance towards domestic politics. Accordingly, they began to comment negatively on the economic, political, and cultural-educative problems in communist Romania, to highlight the better living conditions in Western countries, and to praise the freedom and the cultural liberty enjoyed by their peers beyond the Iron Curtain. Their cultural opposition turned into a public act with the letter sent to Cornel Chiriac at RFE. Although it was written by Puiu Apostolescu, alias O’Brien McHarisson, two other members, Marinică Odagiu and Georgel Odagiu, signed it using their English nicknames, “Ghary O’Hara” and “Kenedy O’Hara” (sic!), in order to avoid detection by the Securitate. The letter expressed the discontent of the signatories about the measures taken by the party leadership in July 1971 in the cultural realm. It was sent using the Romanian postal service and thus it was confiscated by the Securitate, who opened a file of informative surveillance against the name of Puiu Apostolescu. The Securitate devised a plan of measures of informative surveillance aimed at collecting as much information as possible about the activity of Puiu Apostolescu and his close friend, Marinică Odagiu. To this end, it used various means, such as recruitment of sources, interception of correspondence, stakeout, monitoring of their personal relations, and the interrogation of those directly involved in the activity of the Club of the Free Kings. This was done in order to get a detailed picture of the group, its members, and its activity. After the Securitate finished its investigation of The Club of the Free Kings in January 1972, it decided to dismantle the group. Thus, in January 1972, most of The Free Kings, including Puiu Apostolescu, were excluded from the local communist youth organisation after their behaviour was incriminated in a public debate involving their colleagues and teachers. Others received warnings from the Securitate (ACNSAS, I 3032 vol. 1).