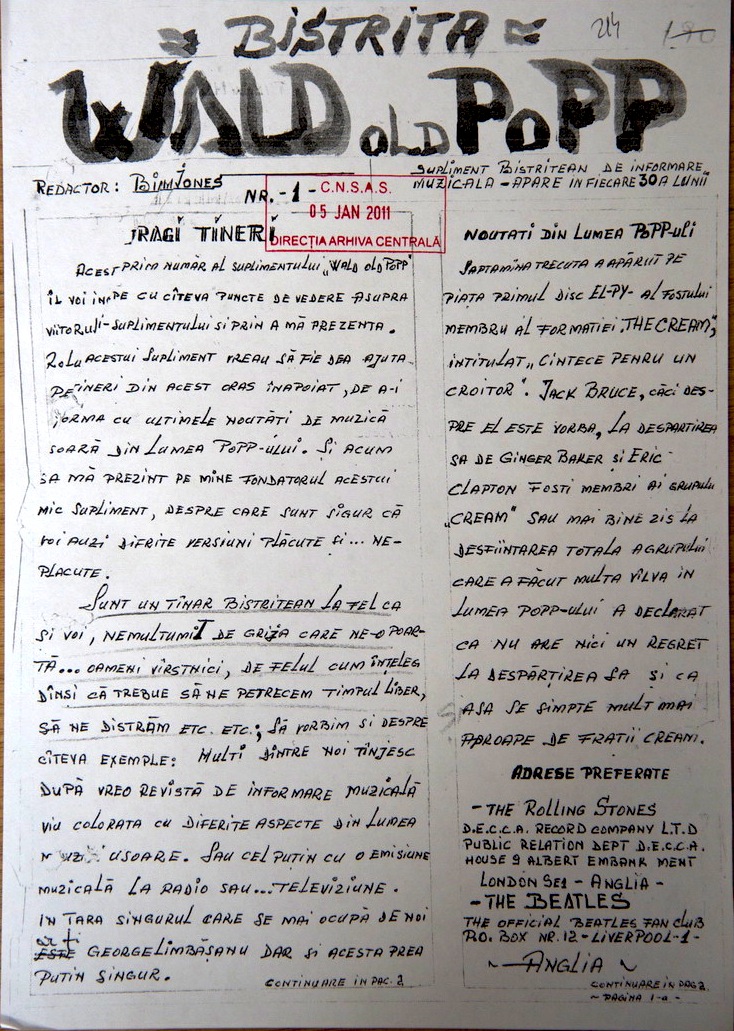 Wald old popp was one of the few musical samizdat publications in communist Romania. It was created in 1969 by Emil Hidoș, a twenty-year-old man from the town of Bistrița, who was passionate about foreign music. He was a faithful listener to Cornel Chiriac’s musical programme Metronom, broadcast by the Romanian department of Radio Free Europe (RFE). The copies of Wald old popp were confiscated by the Romanian secret police, the Securitate, in June 1970, after a search at Hidoș’s home. The Securitate used the samizdat as the main evidence against him and for his prosecution under the charge of “propaganda against the socialist order,” and copies of the publication were included in his penal file.

The musical samizdat Wald old popp was a handwritten publication whose chief editor was “Braim Iones,” the nickname used by Emil Hidoș. The copies were made using carbon paper. The subtitle of the samizdat, The Bistrița supplement of musical information, gives a hint as to the purpose of the editor: “to help the young people of this backward town, to inform them about the latest musical news from the world of popp (sic!).” Very interesting is Emil Hidoș’s short self-description, which illustrates his revolt against the limitations the communist regime put on the consumption of foreign cultural goods, which were nonetheless highly interesting to young people: “I am a young man in Bistrița just like you, unhappy with the care shown to us… by the older people, with the way in which they understand how we should spend our free time, have fun etc.” After stating that Romanian youth needed a magazine, a radio or a television programme to get information about the latest musical developments, Emil Hidoș underlined once again his personal revolt against this state of affairs and the fact that he was forced to create “such miserable supplements, which resemble more closely a manifesto than a supplement of music information.” From his point of view, the forced isolation of youth from the outside Western musical world would only increase their revolt against the communist regime to the point where things would get out of hand and the authorities would not be able to silence the young people’s revolt.

This editorial was followed by several articles about the latest developments in “popp” music, as Emil Hidoș misspelled and mistakenly labelled all music played at RFE and other foreign radio stations at that time. The entries concerned the latest “El-PY” (LP or Long Play) of a former member of the British rock band Cream and new releases of albums. Other columns contained the addresses of fan clubs of the most popular bands of that time, such as the Beatles and the Rolling Stones, and a musical chart. A special feature was dedicated to “Events in Bistrița,” where Hidoș described how the authorities had reacted negatively to the exaltation displayed by young people during the concert of Cromatic Group, a rock band from the nearby city of Cluj-Napoca. He used the event as pretext for fresh criticism of the communist regime, which labelled as “hooliganism” the patterns of spending their free time that many young people adopted in revolt against the older generation and implicitly the communist regime. From Hidoș’s point of view, the critical stance of the authorities toward this issue was unfounded, as the officially-sponsored relevant organisations failed to take into consideration alternative and more appealing modes of entertainment. He ended his article by wondering when youth in Romanian would enjoy “total freedom” (ACNSAS, P 14400 vol. 1, ff. 215–223 f–v).