The diary describes the everyday life of the intelligentsia of that time. It chronicles everyday events that were observed by Jasas. Much of it is not relevant to the question of cultural opposition, because of its descriptions of ordinary daily routine. But it has many interesting insights, and even allegorical expressions, that could be used to describe and understand the social, ethnic and political situation in Soviet Lithuania at that time. 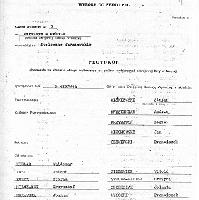 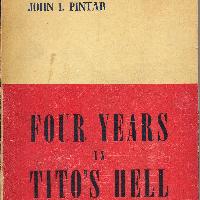 John I. (Ivan) Pintar was an American citizen and entrepreneur who lived and worked in Zagreb since the mid-1930s. After World War Two, the communist regime in Yugoslavia arrested him in the autumn of 1946 and sentenced him to death in early 1947 after a show trial under charges of being an American spy. Thanks to the mediation of US authorities and the US embassy in Belgrade, his sentence was reduced to 20 years in prison with forced labour.

After four years spent in jail in Lepoglava and Srijemska Mitrovica, and after the persistent efforts of the US Department of State and US Ambassador to Belgrade George V. Allen, he was released at the end of 1950 and returned to the United States (New York). He wrote a book on the communist regime and his prison experience. He could not publish the book in Yugoslavia, nor in the United States, as officials in the Yugoslav embassy in Washington obstructed him in his efforts to do so. Certain Yugoslav diplomats even offered him money to hand over the manuscript to prevent its publication. Ljeposav Peranić, a pre-war Croatian immigrant in Argentina, provided help to Pintar and he published his book in Buenos Aires with a print run of 3,000 copies. Pintar dedicated the book to all victims of communism. He served his sentence in Lepoglava prison in 1947, when Zagreb Archbishop Alojzije Stepinac was also imprisoned there. Pintar testified about Stepinac’s imprisonment. In the conclusion of his book, Pintar said: “What I experienced in Tito's Communist State has been repeated in every country which has had the misfortune to come under Communist control” (Pintar 1954, 295). In 1995, the book was also published in Croatian. 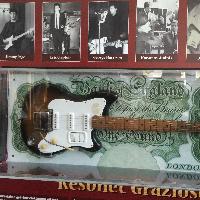 Jolana Grazioso Guitar, 1958.
This guitar is the most valuable one from the guitar collection of Rock Museum. During the 1950s and 1960s, a Czech guitar series called “Jolana” was tremendously popular, not only in the socialist countries but also in Great Britain. It was also awarded a gold medal at the Brussels Expo 58'. Jimmy Page, Eric Clapton, and George Harrison used to play on “Jolana” guitars at the time. It is an interesting example of cultural transfer between the West and state socialist countries in a field which is considered principally the domain of “Western culture.”
czytaj więcej 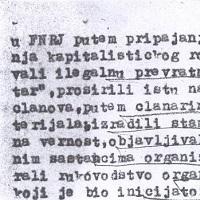 The historical Prizren League was an Albanian political organization officially founded on 10 of June 1878 in the historic center of Prizren, Kosovo. One of the main demands of the League was the unification of all claimed Albanian territories within the Ottoman Empire into one vilayet. In the second half of the twentieth century, illegal organizations in regions of Kosovo (including Dukagjini/Metohija) used this same name to demonstrate an association with the historical Prizren League of 1878. The modern Prizren League was guided by famous national figures and intellectuals of the period including Ymer Berisha, Halim Spahiu, Selman Riza, Gjon Serreqi, among others.

It should be noted that this illegal organization’s program mainly aimed at the unification of what it considered “Albanian lands” into one state. In the eyes of the Yugoslav regime, the illegal group threatened the social order of SFRY, which was the main reason for their persecution.

According to documents of the District Court of Pristina, the Prizren League was established during the summer of 1949. The trial was held over 24–26 July 1950, at the same court. Dušan Stanić s head of the jury and Čedomir Ilić and Muharrem Agja as judges. This trial was based on the Public Prosecution's indictment number 79/50 from June 27, 1950, which was presented by Bora Stanojević.
The judge declared the accused guilty and sentenced them according to Article 13 of Yugoslav criminal law. The accused were found guilty of "planning to violently challenge the social order of the SFRY, forcefully joining Albania and returning capitalist order in SFRY".

The following activists were found guilty and sentenced:

1. Shaban Dërguti, a student of agronomy from Rahovec/Orahovac, born 1924. For involvement in illegal activities, sentenced to 20 years in prison.

2. Mustafa Nixha, a clerk from Prizren, born in Gjakova/Đakovica in 1918. He was married and a father of one. Sentenced to 20 years in prison.

3. Shaban Mazreku, a farmer from Suharekë/Suva Reka, born in 1919. He was married. He was held in pre-trial detention since 19 February 1950. Sentenced to 101 years in prison.