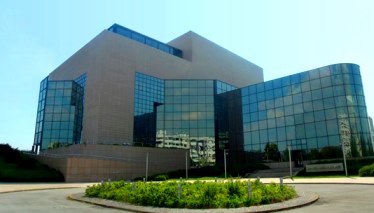 It was originally located in an abandoned Dominican monastery in today’s Trg Svete Katerine 5, and later in the building of the current Rector’s Office, located at today's Croatian State Archives, and since 1995 has been located in an impressive and newly constructed building in a street called Ulica Hrvatske bratske zajednice.

Its primary function is to store Croatian cultural property in written, printed, and modern digital form. This task was carried out in its entirety even during the period of socialism which is particularly evident in the fact that the so-called unsuitable books were also kept. During that period, the institution itself had no opposition role; it was the official, central Croatian library. However, there did exist opposition activity amongst some of its employees, for example, Branko Hanž who stored away the unsuitable books.